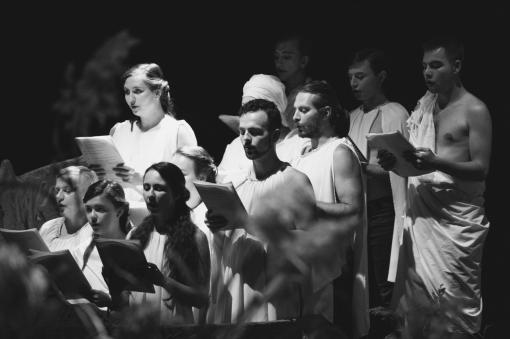 The third event of this year’s Moravian Autumn festival was transferred to a theatre stage. The event was made happen by Terén, which is a platform acting as a third stage of the Centre of Experimental Theatre, right after the Goose on a String and HaDivadlo theatres. And it was on this particular stage of the Goose on a String where the world premiere of a stage production of Oedipus by André Gide took place yesterday. Composer Bohuslav Martinů stands behind its equally important incidental music.

Brno in particular seems to be the ideal place for such dramaturgically daring deeds given its artistic past and present, in relation to the works of Bohuslav Martinů (after many successful premieres of his compositions). All the more so when the fiftieth festival season focuses, among other things, on the commemoration of 60 years from the composer’s passing away. This project was only once produced on the radio, and now it has been presented in a stage form. A question remains: to what extent did the production team succeed? 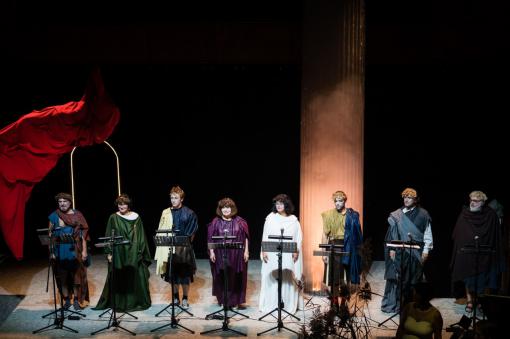 The original spirit of the play for radio work was given by a speaker’s introduction. Perhaps it was unnecessary to hear the narrated content of the printed programme about the history and context of the work. However, if we move back to the original – that is, radio – form of the play, it suddenly all makes sense. The play itself was then launched by an unusually arranged musical ensemble, in which the strongly supported dissonances immediately exalted the rich voice of soprano Pavla Radostová (the only singing element of the evening), sounding indefinitely vocal even in the lower pitch.

During the introduction, the main actors – eight actors – this time, however, only in the role of speakers at the consoles. The directing of Mark Ther indeed in this regard was not really much reflected, contenting itself merely with pure descriptiveness without much effort on the action. The minimum movement and the static scene allowed creating the atmosphere of the radio, but much more could be expected from a directorial performance. The economical and all in all illiterate direction was complemented by an austerity stage design that did not disturb the overall impression in any manner, but did not attract much attention either. 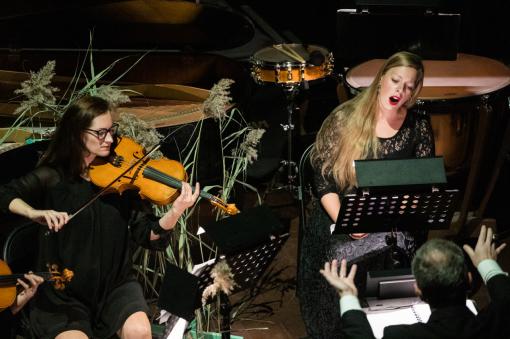 Behind the consoles stood, in ancient costumes and with convincing dramatic recitation, namely Vladimír Hauser (Oedipus) and Jan Kolařík (Creon), who accounted for the largest portion of the text. Kolařík, in particular, excelled in the appropriate timbre of his voice and his work with it. Equally well the protagonists were complemented by Miloslav Maršálek (Theiresias), Helena Čermáková (Jocasta) and, in the roles of Oedipus’ children, Mark Christian Hochman, Radim Brychta and Ivana Plíhalová with Uršula Kluková. The age of the above-named ladies, however, really did not correspond to the prescribed Oedipus’ daughters. The spoken stage action was further complemented by a still-standing 11-member chorus composed of members of the Ústaf-voiceband.cz ensemble. Especially the male part of the ensemble showed inaccuracies in synchronization in some places, but nevertheless their overall interplay can be admired. They in fact functioned in a synchronized manner without any conductor’s gesture.

In addition to the singing voice mentioned above, the musical ensemble consisted of the most frequently sounding piano performed by Libuše Pančochová, followed by the unusually elected two violas (played by philharmonics Julian Veverica and Klára Hegnerová), whose apparent uncertainty in intonation and entries was caused by the dispositions of an the instrument that in normally circumstances does not excel so much in the orchestra. The philharmonic line-up was then supplemented by clarinettist Lukáš Daňhel and trumpeter Petr Hojač, who despite their combination of acoustically unbalanced winds managed to adapt their play to the overall sound of the orchestra, and all that took place under the patronage of percussionist Lukáš Krejčí, whose clear and striking play was most needed for the dramatic action. Conductor Tomáš Krejčí then had rather a navigational and regulating function, as he craftfully and in a coordinated manner kept all the performing components in harmony. 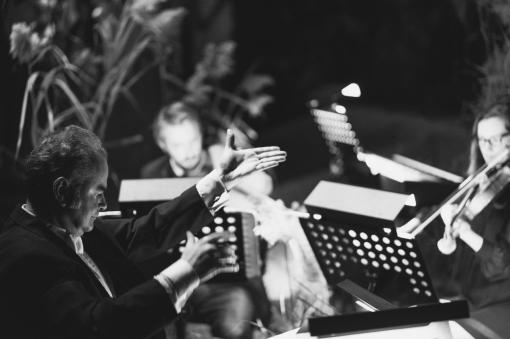 The orchestra underlined selected passages of the narration with a dynamically appropriate musical accompaniment, and in other parts the piano or percussion were enlivened by concise thundering keystrokes and there was also room for a separate performance of the musical component. In several repeated interludes it was even possible to hear a reference to the composer’s cycle Špalíček in the form of a piano second-to-second run. For most of the time, however, the spoken dialogues had their own fields of action, and the musical component was therefore not used too much. Especially in the first part of the evening any support to the spoken performance would help, because despite the interesting theme, the Brno performance lacked an adequate tempo. In a language that in some places was perhaps too modern, however, after an acceptable hour and a quarter, the story eventually reached (to the surprise and amusement of all) an intricate network of family relationships between the individual characters.

The ninety-minute performance would undoubtedly be an interesting and innovative deed of the festival dramaturgy, and would certainly have added many plus points to the festival account with its world premiere status. For this reason, too, it was possible to expect from a similar event much more than the embarrassed direction as well as conception of the whole evening and exploiting or grasping its potential. Therefore, the mistake cannot be looked for in the selection of the play, but in its yesterday’s Brno production.