In the premises of the neo-Gothic Czech Brethren Evangelical Church of J. A. Comenius, on the fifth evening of the Moravian Autumn festival, a performance of sacred music for choir and organ took place. In addition to the choir of the same name, Martinů Voices was also dominated by the organist Linda Sítková and a four-member ensemble of French horns. All this under the direction of choirmaster Lukáš Vasilek.

The original programme consisted of smaller pieces whose date mark did not exceed the boundaries of the twentieth century and which were linked by their spiritual focus. In the case of the setting of two complete ordinaries to music, it was also a direct part of the Mass Liturgy. After two or three works, composer Jan Novák, an author inherently connected with Brno, to whom attention has been commendably growing in recent years, and Novák’s teacher and later a lifelong friend Bohuslav Martinů were introduced in individual blocks. The pair of a teacher and a pupil was then accompanied by Leoš Janáček’s choral arrangement of the organ mass by Ferenc Liszt. 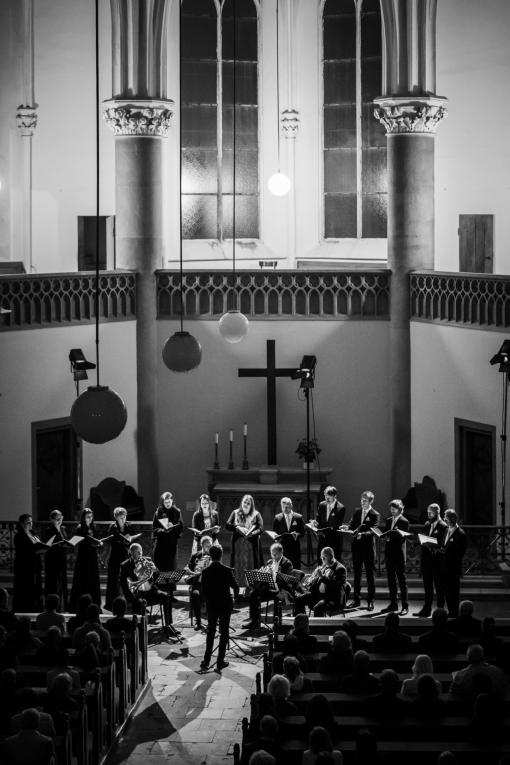 The Testamentum for soloists, mixed choir and four French horns by Jan Novák, to the words of an almost parodical and humorous Latin poem by Josef Eberle (a whole generation older than Jan Novák), was an ambitiously selected introduction. Such a high-tempered piece could still partially escape to an audience still not accustomed to music. Initial dynamic and intonation uncertainty, however, disappeared during the composition the piece made  shine mainly solos of individual members of the choir, interesting in timbre, engagement and precision of the performance. Already in the first composition, the ensemble under the energetic leadership of Lukáš Vasilek showed its dynamic possibilities and capabilities, also in combination with four French horns (composed of Jan Vobořil, Petr Hernych, Mikuláš Koska and Zdeněk Vašina), which provided the vocal component with soft, graceful and  whenever needed also spirited accompaniment. On the contrary, the acoustics of the temple with a long reverberation did not seem very favourable in the short, agile or acute passages, which made it difficult to understand the (Latin) text, no matter how  for carefully articulated by the performers, and even the music sometimes seemed to be excessive for the limited space of the temple.

Martinů Voices introduced with understanding the specific elements of Novák’s compositional style also in the next composition Missa philadelphie (translated as “brotherly love”). The joyful five-voice Mass dedicated to Novák’s brother Metoděj speaks about knowledge in a more transparent and accessible musical language. The mass uses the division of the chamber choir into higher and lower voices, these sections alternate and complement in the recitation and the composer imaginatively works with this contrast. The choral incipit was declaimed from the anterior choir concourse by tenor Ondřej Holub, as well as the single-voice choral Credo, which the composer missed in his musical setting. The choral melody with its extra-musical function, although indispensable elsewhere, was somewhat redundant in the concert ambiance. Also, its performance was very attractive in terms of sound, but quite agile, and in one case it did not even renounce to readable emotions. 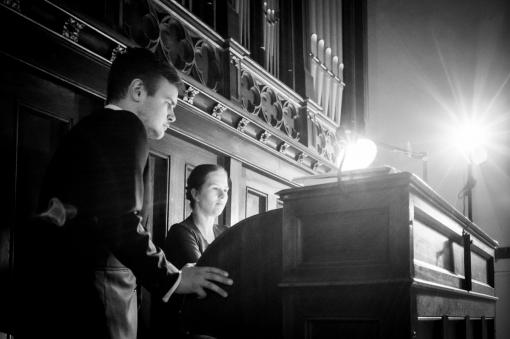 In the third piece by Jan Novák, Jubilatio matutina for organ, organist Linda Sítková was featured as a soloist and for the first time this evening. The morning praise of the Liturgy of the Hours was a demanding composition in all directions, both for the audience and for the performer, who rendered the work wholly compacted at the allegro pace (Tempus alacre et festivum, quo animus tollatur) flawlessly, conveying the audience an unquieting but hopeful message for the new day.

The continuation of the programme was a dramaturgical surprise – it returned in time not only to Leoš Janáček but through the Mass in B flat major, after the Messe pour orgue by Franz Liszt, also to this giant of romantic music. The follow-up also seemed unusual in connection with, for example, Novák’s liking for exclusiveness and humour. Despite the sudden change in musical language, it is impossible to overhear by what Liszt’s music intrigued Leoš Janáček. The organ and choir produced a pleasantly compact and balanced sound, and the particularly lyrical passages of the silent organ were impressive. The graceful work proceeded slightly, without excessive excitement or conflicts, and its rendering was done with ease and with bravura, with  the only exception of intonation hesitation in the choral incipitus. 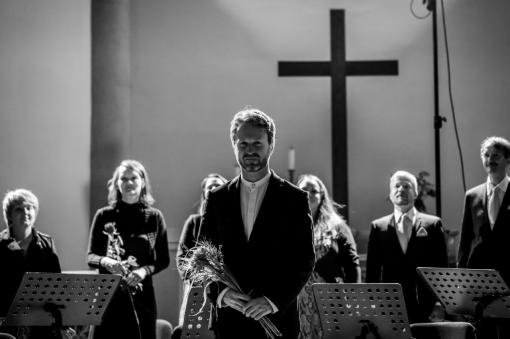 The composition of the third section, dedicated to Bohuslav Martinů, Vigil for Organ continued in the meditative mood and after the second Mass of the evening gave the audience the opportunity to symbolically exhale and absorb the still lingering atmosphere of Agnus Dei. As a purely instrumental piece, it prepared a space for the expectation of a profile repertoire of the main performers, the Four Songs of Mary by Bohuslav Martinů, whose words were taken over by the composer from the collection of František Sušil. Despite the fact that Czech was heard for the first time in that evening, the lyrics of Moravian Marian folk songs could not be understood often due to the significant reverberation. This was counterbalanced by Martinů Voices with a confident and sovereign interpretation without any hesitation, and the ensemble also mastered the dramatic sections with indications of the madrigal rate, which, after all, it has a wealth of experience. The conclusion of the whole concert on the dominant was striking and clear and the choir confirmed its strengths in dynamism and dynamics, which completely filled the temple spaces. The line of Bohuslav Martinů commemorates at the festival the 60th anniversary of the composer’s death and was enriched by good dramaturgy beyond the usual boundaries of modern spiritual music by offering a work of composer Jan Novák in excellent interpretation.